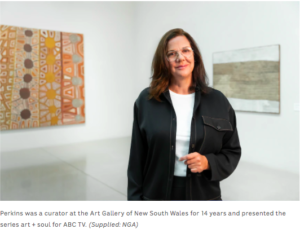 We all know how important the arts—whether in film, music, performance or the visual arts—have been in helping non-Indigeneous Australians understand the depth and breadth of Australia’s ancient cultural heritage of our First Nations peoples.  It tells not only a story of the devastation of white colonial settlement across the vast continent, but of the enduring eco-spiritual vision of a way of living through a deeply relationist ethos with Country as an all embracing term that includes landscape, skyscape, people, animals, plants and Ancestral Beings.  Once again we are being given the opportunity to learn about this inheritance.

As the NGA says about this important exhibition:

Ceremony remains central to the creative practice of many Aboriginal and Torres Strait Islander artists. This exhibition and program of events will animate and heal to reveal how ceremony is at the nexus of Country, of culture and of community.

From the intimate and personal to the collective and collaborative, ceremonies manifest through visual art, film, music and dance. Ceremonial practice has a performative element. At its heart is the concept of iteration, the artist’s conscious engagement with what has come before. Iteration can be expressed in the painted minutiae of tali (sandhills) or the click of a shutter.

To encourage you to visit the exhibition at the National Gallery, Canberra — open till 31st July, I am sharing this interview with curator Hetti Perkins, published on ABC Online

When curator Hetti Perkins talks about ‘ceremony’ she invokes the image of an iceberg: the public part we experience is the tip, floating above the water — but below that surface there are stories with immense depth and breadth known only to our ancestors and senior people.

“I think that’s what [Indigenous] artists do. They really draw on that motherload of culture and story that influences all of our lives,” Perkins says.

The Arrente and Kalkadoon woman is the curator of the fourth National Indigenous Art Triennial, which is exploring the theme ‘ceremony’.

“It’s been a real privilege for me to be part of this project and to work with the artists and the team here at the National Gallery of Australia,” she says.

“And credit to [the NGA]: they’ve taken on the challenge of doing a triennial when all the works are newly commissioned in a couple of years when COVID has seriously compromised people’s ability to make work, to travel, to get work here — to even get supplies.”

As well as the challenges presented by the pandemic, some of the artists featured have also been affected by the 2019-20 bushfires, or more recently the east coast floods.

Made up of more than 280 ceramic banksia forms, the intricate constellation of K/Gamilaroi artist Penny Evans’s installation gudhuwali BURN hangs safely on the NGA’s walls, but mere weeks ago her hometown of Lismore on Bundjalung Country was hit by a record-breaking flood that has devastated the region.

Perkins says she’s “incredibly grateful” for the patience and graciousness of all 38 artists featured in the exhibition.

“I just found them all so inspiring. But you know, when you look at it, our mob have been grappling with a lot of trauma for a couple of centuries now. But that’s something that has been really important – the generosity of spirit and the support of the artists,” she explains.

Ceremony as a political act 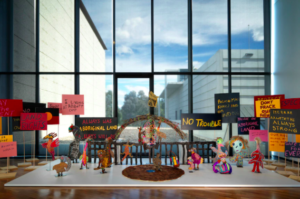 Meanwhile the exhibition itself has been postponed and rescheduled a number of times, with the opening now taking place just two months after the Aboriginal Tent Embassy, nearby, marked its 50th Anniversary, on January 26.

The auspicious timing draws the exhibition even more tightly to the idea of demonstrations and protests as a form of ceremony – one that brings people together with the common goal of creating something better.

“If we take that as a starting point, we’re talking about Canberra or Kamberri as a place that people know as the political capital, where Parliament House is, and for many people it’s a distant place where decisions are made that affect the daily lives of our people, and they don’t feel like they have a say in that process.”

This sense of disenfranchisement is manifest in the installation Blak Parliament House, which is situated at the entrance of the exhibition.

Created by a collective of Yarrenyty Arltere artists and Tangentyere artists from Mparntwe (Alice Springs), it consists of soft sculpture people and animals engaging in meetings, debates, and even protest, outside a reimagined Parliament House.

“It’s really interesting to think about Canberra in those terms; about this place and the nation’s capital, and there are places called ‘ceremonial parade’ and ‘the ceremonial triangle’ — so there’s all this whitefella ceremony, but of course it’s an ancient place of culture,” Perkins explains.

Yawuru artist Robert Andrew’s ‘writing machine’ is a kinetic sculpture that responds to the cultural history of the Kamberri/Canberra region by gradually revealing a phrase gifted to him by Dr Matilda House and her son Paul Girrawah House, two Traditional Custodians of the region, whose work is also featured in Ceremony.

“[Andrew’s work is] one of those things where, to get to the end — to get to the ceremonial act — you have to be part of that journey and find your place in it, and watch and listen, and be patient and learn,” Perkins says.

It demonstrates that ceremony is more than a singular act; it’s a process and a learning that takes place, sometimes over an extensive period of time.

“Even looking at it [his artwork] now, there’s just these very scattered marks, but when it started out it looked almost like bullet holes with bleeds. It’s also evocative of rock art. So, it assumes all these different significances, depending on when you’re looking at it.”

Extending beyond the white cube of the gallery

An accomplished curator who has worked on exhibits at the Venice Biennale and the Musée du quai Branly in Paris, Perkins wanted Ceremony to break free of the white cube format of gallery exhibitions.

S.J Norman’s Bone Library will see him engraving animal bones – specifically those of sheep and beef cattle – with words from the Walgalu language of south-eastern NSW, an Aboriginal language that has been classified in linguistic orthodoxy as ‘extinct’.

Perkins said having Norman carve the bones on site meant considering how bone dust might affect the inner workings of the gallery and its collections.

“Rightly so, there’s all these controls around climate, and dust moving through the building, and how the air circulates — and all these things that we as visitors [to the gallery] don’t really think about,” she says.

Perkins has also programmed a number of works that extend beyond the confines of the building.

From Nicole Foreshew and Boorljoonngali’s healing mist Wir Guwang (sky rain) in Fiona Hall’s fern garden, to Robert Fielding’s Holden On (an abandoned car painted with designs from his Arrente and Yankunytjatjara cultures) mounted on a pontoon on Lake Burley Griffin, to the scarred trees of Mulanggari yur-wang (alive and strong) by Dr Matilda House and her son Paul Girrawah House, Perkins hopes to make the walls of the gallery feel “more porous and less like a fortress”.

“So it’s very much about saying there’s the skin of the building, but the building is not the thing. It shelters the work, it holds work within it, but the work travels outside of it.”

Paul Girrawah House agrees that expanding the idea of what a gallery space is, particularly through challenging Eurocentric ways of exhibiting art, allows Indigenous people to maintain control of our stories.

“We all carry with us lore, language and respect,” he says.

“I think it’s important that we ‘sovereignise’

with our philosophies and ideologies, and how we see our work on Country.”